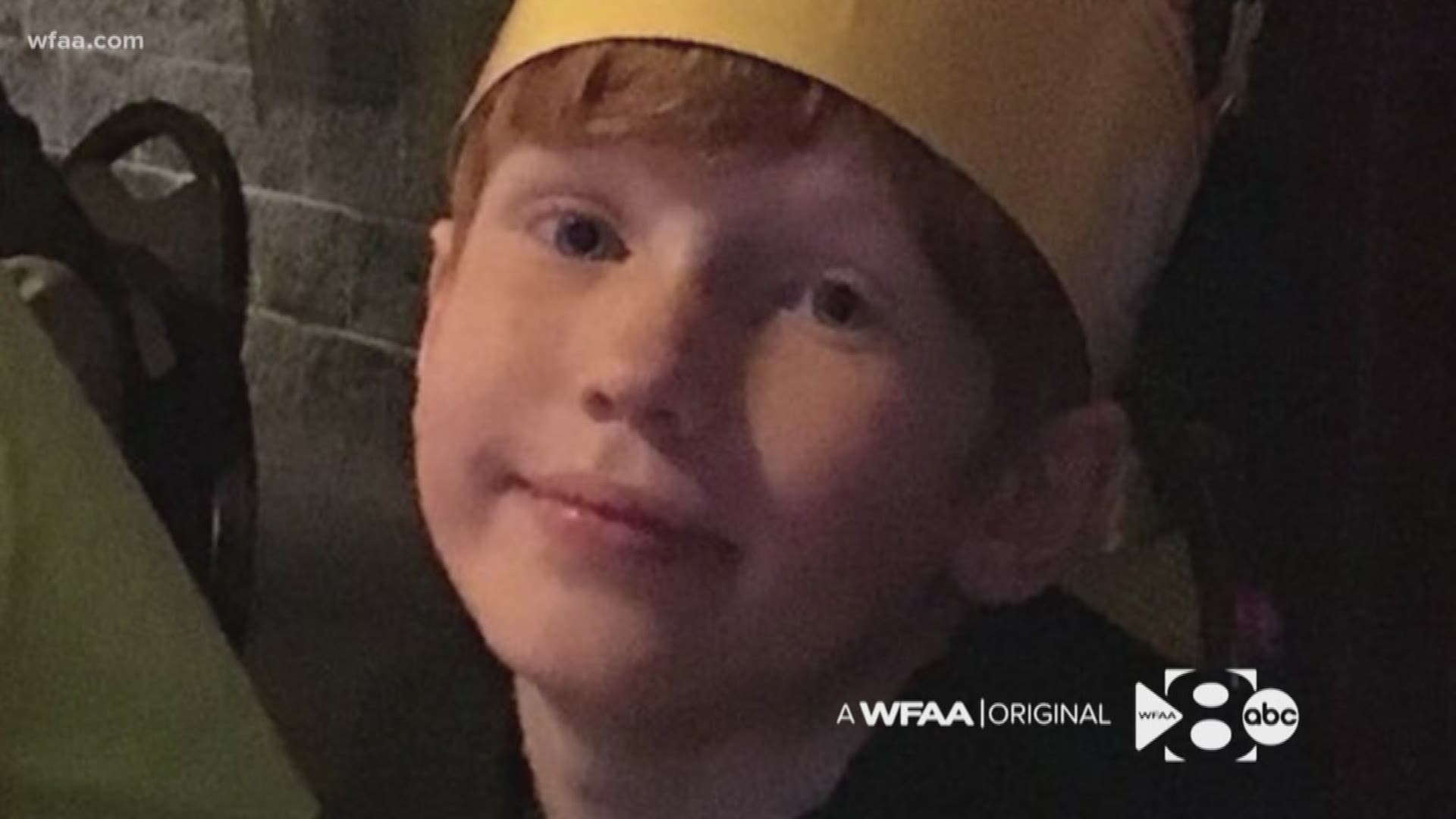 Building a ‘village’ out of a family tragedy
Author: Kevin Reece
Published: 8:05 PM CDT May 29, 2018
The parents of an 11-year-old boy marked a difficult and somber anniversary last month by promising to help the next family that might soon have to walk their same emotional and painful path.

Carson Dyke’s parents described to us a fun-loving kid who still played with Legos. A goofy, intelligent red-head, the youngest of three brothers.

But on April 28 of last year after a disagreement over chores at their house in Coppell, Carson, a straight-A student, an all-around good kid, seemed overly upset.

“And he came down, and he was just crying and it was really more than anything. It didn’t fit the situation,” his mom April Dyke said.

It didn’t fit at all. And later that night when Jason went to his son’s room to call him to dinner, he found the last horrible scene he could ever have imagined.

He’d taken his own life, at the tender young age of 11. He didn’t leave a note. He didn’t tell anyone why. And a year later, his parents still don’t know what went wrong.

“I still wake up and have to remind myself sometimes that he’s really gone,” April Dyke said. “It just doesn’t make sense. I’m lost, and I’ve got to come to terms that I’m not going to ever know.”

To get some sense of purpose from all this sadness and death, an idea was born. When Carson died, a village of friends and family surrounded his mom and dad and brothers, helping them through the grief and guiding them through the sudden details and decisions that a sudden death brings.

“It was amazing the amount of people that surrounded us,” Jason Dyke said.

So they started a village of their own: Carson’s Village. The online resource, with Carson’s red hair front and center in the organization’s logo, is designed to help other families navigate what to do, who to talk to, who to turn to when an unexpected death also reaches them.

“And so we want to be the village for them,” Jason said. “We want to be there to take care of their needs when they don’t have anybody else to go to.”

They chose to go back to the Medical City Las Colinas emergency room last month on the anniversary of their son’s death. They brought a box of Legos with them. They like to give them as gifts to people who have touched their lives. It was part of their attempt to thank the doctors and nurses who tried so hard to save Carson’s life.

“I’m so glad you all have turned this into a positive,” one nurse told them.

“I just admire you for everything that you’ve done and what you are doing for everyone else is just beautiful,” another nurse said through her tears.

“And helping families kind of helps us too because it helps us heal,” Jason Dyke said. “I don’t truly have to bury him,” he explained. “So, he’s not truly gone. And by doing this it helps keep him, it helps keep his name out there. I get to talk about him. I get to have conversations. I get to say his name. And that’s huge.”

“There are still very rough days,” April Dyke added. “And there are days that you just stay busy. And at the end of the day you say OK, I helped somebody today.”

“He was a good kid,” Jason Dyke said. “And we’re hoping he continues to help people, one Lego at a time.”

A name and a purpose they hope live far beyond Carson’s all too short 11 years.